Journey from Acre and Capture 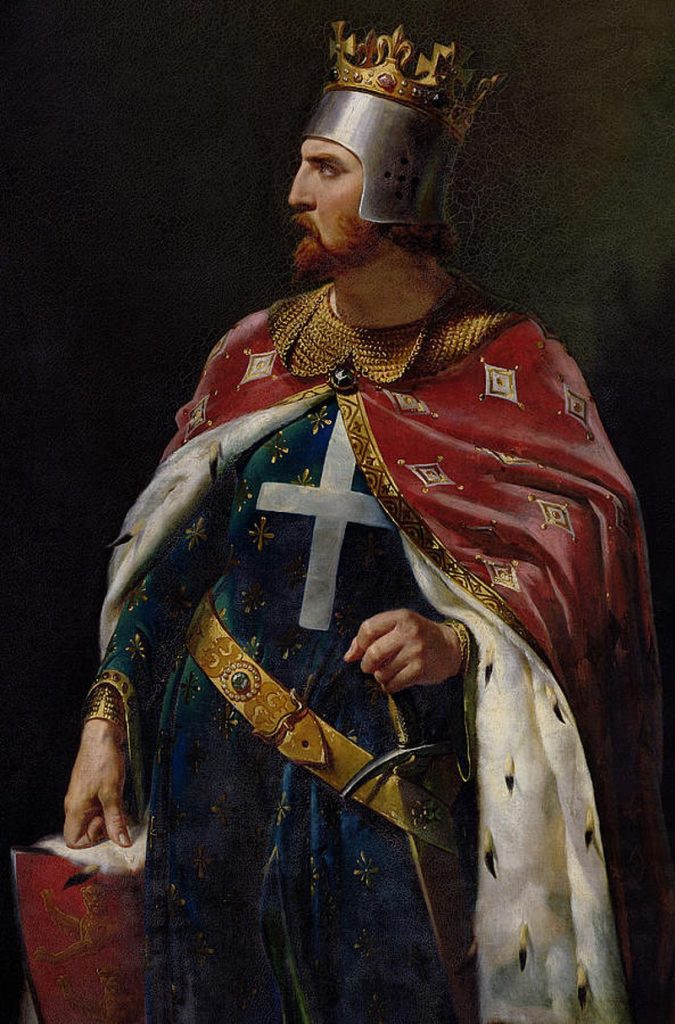 The peace treaty between Richard the Lionheart and Sultan Saladin was signed on the 2nd of September, 1192.  It reestablished the Kingdom of Jerusalem, although without the holy city.  The Third Crusade was officially over, and Richard set out on a long journey back home.

Unfortunately, King Richard’s return to England didn’t go as planned.  He didn’t take a direct route to Marseilles, which was the shortest way back home. At that time, the monarch couldn’t know that soon he would become a captive king.

Awful weather conditions caused him to land at Corfu which belonged to the Byzantine Emperor, Isaac II Angelos.  From Corfu, Richard could still sail for Marseilles, but he didn’t.  Maybe he was informed that if he had landed at Marseilles, his adversary, Count Raymond of Toulouse, might take him prisoner.

At Corfu, the King of England embarked on another perilous adventure.  He hired a pirate ship to carry him and his followers along the Dalmatian coast, in modern Croatia.  But storms were so severe that the vessel was wrecked near Aquileia in the Northern Adriatic.  As a result, Richard and his companions were forced to take a dangerous route through Central Europe.

At first, the Lionheart and his men traveled disguised as pilgrims through Italy.  However, their masquerade was quickly proven ineffective because of their refined manners and of their extravagant spending.  When Richard and his men arrived at Dubrovnik, the monarch made a generous contribution to build a grand church in honor of the Blessed Virgin Mary (today it is Dubrovnik Cathedral).  Unfortunately, this revealed the true identities of the disguised pilgrims.

As his journey progressed, Richard also posed as a merchant, but this disguise was as ineffective as the previous one.  He and his men successfully traveled to the town of Friesach before being tracked down by a knight hired to intercept and capture Richard.  This time, luck was on the king’s side as the man turned out to be secretly loyal to him and warned him about the danger.

To avoid capture, the English ruler hastily departed from Friesach to Vienna together with only one knight, William de l’Estang, and a serving boy.  They left behind Baldwin of Bethune so that he could try to delay those pursuing Richard by posing as the king.  After the king’s escape, Richard’s enemies were hunting him in the town and its surroundings, and soon they managed to capture Baldwin.

At that time, Richard and William were about one hundred and forty-five miles away from Friesach; they were both exhausted and became less vigilant.  Richard sensed danger after his servant boy’s sudden disappearance, but he and William needed rest and couldn’t flee again.  Meanwhile, the servant boy was interrogated and compelled to disclose the monarch’s location.

The consequences were disastrous for Richard the Lionheart.  Duke Leopold V of Austria sent his men to surround the local tavern, where his English rival was resting.  On the 10th of December, 1192, Richard had no choice but to surrender himself.

The duke accused Richard of arranging the murder of his cousin, Conrad of Montferrat, although there was no proof of the king’s involvement in the crime.  The real reason for the duke’s animosity towards the English monarch seems to have been Leopold’s inability to forgive Richard for the grievous offense caused to him in Acre, when the Lionheart had cast down his standard from the walls of the city.

While being Leopold’s prisoner, the captive king was kept at Dürnstein Castle under the care of Hadmar of Kuenring, Leopold’s trusted man.

Leopold of Austria entered into negotiations with Henry VI, King of Germany and Holy Roman Emperor.  On the 28th of March, 1193, Richard the Lionheart was brought to Speyer and handed over to the emperor.  Later, the English king was imprisoned at Trifels Castle in Western Germany.

Henry VI held a grudge against the Lionheart for Richard’s support of Henry the Lion’s family and for his recognition of Tancred in Sicily.  Moreover, many of Richard’s allies were Henry’s enemies.  At that time, the emperor urgently needed funds to raise an army in order to assert his rights over the south of Italy, so it was beneficial for him to hold the king for ransom.   King Philippe II of France proposed to pay handsomely for the prolongation of his English counterpart’s captivity, as he intended to attack Normandy and Richard’s other continental lands.

Together, Leopold of Austria and Emperor Henry created a long list of the concessions they hoped to wring from Richard.  Nevertheless, the English king proudly refused to show deference to the emperor.  Richard admirably defended himself against the accusation of Conrad de Montferrat’s murder and also refused to agree to all the unfair conditions Henry offered.  It is known that Richard declared to the emperor:

“I am born of a rank which recognizes no superior but God.”

For some time, no one was aware what had happened to Richard the Lionheart.  After his disappearance, Prince John, Richard’s younger and vile brother, spread rumors throughout the English realm that the monarch was dead or permanently lost.  Seizing the opportunity, John arrived at the French court and met with King Philippe II of France, making an alliance with him.  In exchange for the French support, he agreed to cast aside his spouse, Isabella of Gloucester, and wed Philippe’s sister, Alys, who had once been betrothed to Richard.

Soon the fate of the captive king became widely known, and everyone in Christendom learned that the emperor was holding the King of England captive.  As a Crusader returning from the Holy Land, Richard was a pilgrim, and, hence, he was under the protection of the Catholic Church.  Therefore, Pope Celestine III excommunicated Henry VI and Leopold of Austria for the wrongful imprisonment of the English monarch.

Subsequently, in England, friction broke out between King Richard’s loyal subjects and treacherous lords, who switched their allegiances and supported Prince John.  The king’s loyal councilors sent two abbots to find their king and to establish communication with him; these envoys succeeded with great difficulty, but they were able to see their liege lord.

Queen Eleanor of Aquitaine rescued her favorite son from the German captivity.  Unfortunately, when Richard had raised funds for the Crusade several years earlier, he had drained the country’s coffers, so it was not easy to collect the necessary amount of money.  Eleanor worked hard to raise the ransom for the captive king, taxing both clergy and laymen and confiscating gold and silver treasures from churches.  Money was also obtained from the scutage and the carucage taxes.  Chests of silver were stored in St.  Paul’s Cathedral, and Eleanor supervised the collection.

Eleanor of Aquitaine’s despair and depression are expressed in her letter to Pope Celestine:

“Pitiful and pitied by no one, why have I come to the ignominy of this detestable old age, who was a ruler of two kingdoms, mother of two kings? My guts are torn from me, my family is carried off and removed from me.  The young king [crown prince Henry, died in 1183] and the count of Britanny [Prince Geoffrey, died in 1186] sleep in dust, and their most unhappy mother is compelled to be irremediably tormented by the memory of the dead.  Two sons remain to my solace, who today survive to punish me, miserable and condemned.  King Richard [the Lionheart] is held in chains [in captivity with Emperor Henry VI of Germany].  His brother, John, depletes his kingdom with iron [the sword] and lays it waste with fire.  In all things the Lord has turned cruel to me and attacked me with the harshness of his hand.  Truly his wrath battles against me: my sons fight amongst themselves, if it is a fight where one is restrained in chains, the other, adding sorrow to sorrow, undertakes to usurp the kingdom of the exile by cruel tyranny.”

The release of the captive king

Eventually, England paid an enormous ransom for King Richard the Lionheart – 150,000 marks (100,000 pounds of silver).  Although King Philippe proposed to pay the emperor 80,000 marks to hold Richard prisoner until Michaelmas 1194, the English ransom was transferred to Germany by the imperial ambassadors.  Eleanor of Aquitaine also successfully defended Richard’s interests against Prince John and his ally, Philip of France.

Before his release, Richard the Lionheart had to take part in the formal ceremony, where he swore the oath of allegiance the Holy Roman Emperor.  In fact, it meant that the English ruler became nominally a subject of Henry’s, and he also consented to annually pay a sum in homage to the empire.

To give him credit, the emperor ceased all communication with King Philippe and Prince John, and he even threatened them with military retribution if they would not return the lands they had taken from Richard during his absence.  At last, after official ceremonies and celebrations, the King of England was released on the 4th of February 1194.

“Look to yourself; the devil is loose.”

Richard’s ordeal of captivity was over, and he returned to England.  His long absence left his empire in disorder, but at that time, the king still intended to return to the Holy Land to finish the Crusade he had started, for his dream was to liberate the holy city from the infidels.  Unbeknownst to Richard, the mission of restoring his realm to order and of defending his continental territories would be at the center of the rest of his reign.

In history, the misfortune to become a captive king is a one-of-a-kind fate.  King Richard the Lionheart is one of the few monarchs who was taken prisoner by a foreign ruler.  Several centuries later, King François I of France would become another captive king who would spend more than a year in the Spanish prison after the defeat of his troops at the Battle of Pavia in 1525.

Source:  Richard the Lionheart: A Life From Beginning to End (Royalty Biography Book 8) by Hourly History

All images are in the public domain.

Posted on February 6, 2018 by Olivia Longueville