On this day in history in 1186, Geoffrey Plantagenet died in Paris. He was the fourth of five sons born to Henry II, King of England, and Eleanor, Duchess of Aquitaine. He died unexpectedly at the age of 27, in the prime of his life. There is also evidence that he might have died on the 21st of August, 1186.

Geoffrey is one of the forgotten Angevin royals: he is rarely the focus of historians because he died young and was the only son of Henry and Eleanor who survived to adulthood, yet never wore a crown. In Angevin history, he has been called “a duke among kings.”

He was born at Beaumont Palace, Oxford. In her biography of Eleanor of Aquitaine, Marion Meade wrote of his birth:

“On September 23, 1158, without fuss or fanfare and almost seeming to be an afterthought, she [Eleanor] gave birth to another son, Geoffrey.”

There are no portraits of Geoffrey Plantagenet at any age known to exist. According to contemporary chronicles, Geoffrey was dark-haired and short of stature; he had an average appearance and was not considered good-looking, charming, or charismatic. He was probably the most intelligent son of Eleanor and Henry, but he used his talents for selfish schemes.

It’s likely that the young Geoffrey was often overshadowed by the towering personalities which dominated the royal family.  His father ruled vast lands and was one of the wealthiest and most successful kings of his time.  His mother had been Queen of France before becoming Queen of England, and through the strength and determination of her personality, she maintained control over the vast, prosperous, and strategic Duchy of Aquitaine.  Geoffrey’s two older brothers were the ambitious Henry the Younger and the man who would become famous as Richard the Lionheart.

These internal family tensions and ambitions led to what is today called, “The Great Revolt of 1173-74.”

At the age of fifteen, Geoffrey found himself swept up in this revolt against his father, although it is doubtful that he played any significant role in the events of the time.  Eventually, Geoffrey and his brothers reconciled to Henry, and a truce was reached at Gisors in 1174.  Unfortunately, this uneasy peace within the Plantagenet royal family was not destined to last.

In July 1181, Geoffrey became the Duke of Brittany and Earl of Richmond upon his marriage to Constance, Duchess of Brittany.  It was a marriage that had been carefully orchestrated by Henry II.

Years earlier, Henry had helped Conan IV, Duke of Brittany put down an uprising.  Duke Conan might have assumed that Henry was helping him maintain control over the Duchy of Brittany, but Henry’s motives were much more mercenary:  Henry decided that Brittany’s location on the western border of Normandy made it a desirable addition to his expansive kingdom.

After putting down the revolt in Brittany, Henry forced Conan to abdicate his title to his five year old daughter, Constance, and then he betrothed the little duchess to eight year old Geoffrey. According to Everard, Henry needed Conan’s abdication to prevent any son of the duke from inheriting the duchy in the future.

Geoffrey Plantagenet and his wife, Constance, had three children: 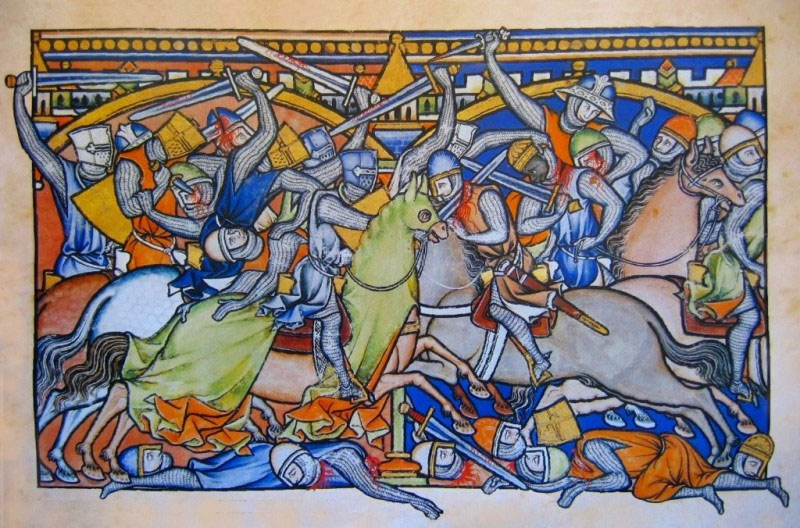 By 1182, Plantagenet family tensions were once again reaching a boiling point.

Henry the Young King grew increasingly frustrated that his coronation had brought him relatively little wealth and no real power.  Meanwhile, Richard ruled Aquitaine, where disgruntled nobles were able to exploit the tensions between the three brothers.  Geoffrey joined Henry the Young King and threatened Richard.  King Henry was required to intervene in an attempt to cool the tempers of his fractious brood.

It is the resolution of this second revolt where historians get their first glimpse of Geoffrey’s nature and temperament.  Henry II and his sons all met in Anjou, at Mirabel, and the three sons took oaths that they would be obedient to the rightful King of England, their father, and would not rebel again.

Soon after taking this oath, Henry the Young King contracted dysentery in June 1183 and died in the Castle of Martel, near Limoges.

Following this second revolt, we get our first glimpse into the nature and personality of Geoffrey from a chronicler of the time, Roger of Hoveden:

“But the said Geoffrey, utterly forgetful of God and of respect for his father, and unmindful of his commands, did not bring peace, but the sword, and, slighting his oath, his homage, and the fealty which he had so often sworn to his father, entered into a compact with the enemies of his father, for the purpose of harassing him, and induced a sacrilegious race, and one detested by the Church of Rome, to ravage the territories of his father.”

Geoffrey allied himself with John Lackland, his youngest brother, against Richard.  Later he joined with young Philippe Augustus, the King of France, against both his father and Richard. In response, Henry II made increasingly violent assaults upon any castle or fiefdom allied with Geoffrey, and, eventually, Henry and Richard captured all the rebellious castles, some of which they razed to the ground.

According to contemporary sources, Geoffrey didn’t have Richard’s great military talent, but he was a ruthless warrior who was capable of terrifying acts of violence. He was best known for his propensity to do anything to get his way.  If he needed to raise funds for his campaigns, he attacked and robbed monasteries and abbeys, and it was this lack of reverence that earned him the displeasure of the Church.

Roger of Hoveden called Geoffrey ‘that son of iniquity and perdition.’ In her book “Eleanor of Aquitaine: By the Wrath of God, Queen of England,” Alison Weir writes:

“Geoffrey’s life would be that of an ambitious and opportunistic robber baron. Ruthless in warfare, he plundered at will, not hesitating to sack abbeys and shrines. He had few scruples, and confronted his critics with devious and shameless excuses.”

In his biography of Henry II of England, Richard Barber says:

“Geoffrey, though skilled in military affairs, eloquent and astute, never won men’s hearts or admiration as his elder brothers had done; he took after his Angevin grandfather, in whose dry and ambitious nature these three qualities predominated.”

Geoffrey Plantagenet was a good friend of Philippe Augustus, the son of King Louis VII of France. He spent time at the French court in Paris, and Philippe even made him his seneschal (a royal steward overseeing the entire country), much to the displeasure of the English monarch. Philippe and Geoffrey acted in alliance against Henry II in the revolt of 1183-1184. Some evidence supports the claim that the two men were planning another rebellion against Henry II in the summer of 1186, but Geoffrey’s sudden death precluded them from launching it.

Having conspired sometimes with and sometimes against his elder brothers and his father, Geoffrey Plantagenet, Duke of Brittany, acquired a reputation for treachery and perdition.

A Cambro-Norman archdeacon of Brecon and historian, Gerald of Wales was a royal clerk to the king and two archbishops. He often travelled and wrote detailed chronicles. He wrote the following of Geoffrey, Duke of Brittany:

“He has more aloes than honey in him; his tongue is smoother than oil; his sweet and persuasive eloquence has enabled him to dissolve the firmest alliances and by his powers of language able to corrupt two kingdoms; of tireless endeavour, a hypocrite in everything, a deceiver and a dissembler.”

At the time of his death, Geoffrey Plantagenet was at the French court. There are two alternative accounts of his death. The most popular version is that the Duke of Brittany was trampled to death in a jousting tournament. According to Roger of Hoveden, Philip was so grief-stricken and devastated that he attempted jumping into the coffin – this is likely an exaggeration, although other chronicles also give some details of Philip’s hysterical grief.

According to the chronicle of the French Royal clerk Rigord, Geoffrey died of sudden acute chest pain in his chest, which was said to be his punishment for plotting against his father and for his lack of respect to the Lord. In this chronicle, it is said that Geoffrey was struck by that illness immediately after boasting to Philippe of his intention to lay Normandy to waste.  It is typical of this time period for chroniclers to invent a manner of death that provides a sense of justice for the sins of the person who has died.  Most historians doubt the veracity of this account of Geoffrey’s death.

Likewise, some historians think that the story of Geoffrey’s death in a tournament was invented by Philip in order to keep Henry II from learning about a new plot against him.

However, it is known that Geoffrey Plantagenet enjoyed tournaments and did participate in them.

Because he drew his last breath in France, Geoffrey’s body was not taken to England for burial. He was put to eternal rest in the choir of Notre Dame de Paris Cathedral, but his tombstone was destroyed in the 18th century, before the French revolution.

All images are in the public domain.

Posted on August 20, 2017 by Olivia Longueville